moslem Prayer Hall in Sleaford... I Don't Think So!

ANOTHER islamic start-up in England. No, this has to stop. moslems have proven themselves to be utter assimilation failures in the West. I'm grateful to the English Defence League for keeping us apprised of this latest encroachment...

Planning officers are recommending committee members approve a proposal for a redundant industrial building to be converted to a Muslim prayer hall in Sleaford.
The Sleaford Muslim Community Association - a registered charity (jihad front group)- has met in St Denys’ Church Hall within the town centre for 10 years and now wants to convert the brick storage shed/workshop on Station Road located between the Royal Mail depot and Turnbull’s builders merchants storage yard.
The scheme has been put before North Kesteven’s planning sub-committee to discuss on Tuesday afternoon by local ward member Coun Keith Dolby to consider issues raised by the users of a neighbouring site, Turnbulls.
Officers in their report explain the shed has been empty for a long period and the site is overgrown with a semi-derelict appearance that seriously detracts from the area.
The current proposal is to refurbish the building with a new brick frontage, cedar cladding to the walls and a new roof. A mezzanine floor would be installed for it to be used as a prayer hall by the local muslim community instead of renting the church hall.
The building would contain two prayer halls, with kitchen, washroom and toilets and a small meeting room. The aim is to make the centre available for other local community groups to use for meetings and functions also if possible.
The small building at the entrance to the yard would be used as a prayer room during the building works and for storage afterwards.
The slate roof would incorporate a modest fibre-glass dome and the new brick frontage would have a middle-eastern style treatment.
The yard would be resurfaced and marked for 15 parking spaces and the front wall lowered with railings on top.
Planning officers have no objections saying it would improve the appearance of the area, but Steve Dunn on behalf of Turnbulls has been seeking assurances that there would be no problems with the new neighbours due to the prayer hall windows overlooking the storage yard, where there would be stacks of bricks close to the building and lorries and forklifts moving around causing noise. He also hoped for no complaints about smells or food cooked by the burger van sited at the entrance to Turnbull’s yard. They also had concerns about obstruction from visitors’ parking outside their entrance.
Representatives of the association applying for permission have already assured the Standard there is no need for neighbours to be concerned as none of the matters raised will be an issue and they would seek to be good neighbours providing a new facility for the community as a whole. 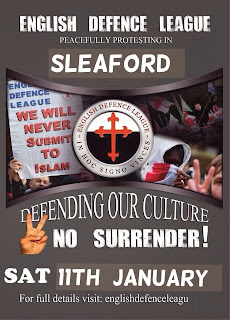 (Want to know what islamists really think of us? View this moslem reaction from Australia regarding the slaying of Drummer Lee Rigby in England:)