Send Your Christmas Salutations to Soldier A

As you know British Marine Soldier, Sgt. Alexander Blackman, was sentenced to a life sentence (with a minimum chance of parole in ten years), by a military tribunal. He will be serving this unjust sentence in a civilian prison. 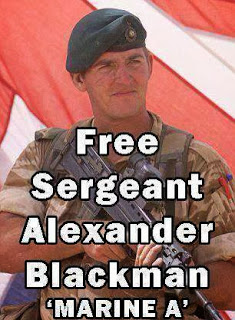 This case ~ is (rightfully) under appeal, but Alexander will still be languishing in a federal prison, in solitary confinement, separated from his family. Please, send him a Christmas card and endorse your support.


He committed NO CRIME, except protecting his fellow Troops.

The Men and Women who serve our Nations Globally should be held in high esteem ~ this is a travesty of justice, and the presiding judge (small caps intended) should be dismissed.

Show your support: Write Sgt Blackman a letter and send him a Christmas card.

Get in touch with the Solicitor:

(They will forward all letters on)

"So many of our Servicemen and women have made the ultimate sacrifice; so many lives have been lost and so many changed forever by the wounds that they have suffered in the course of their duties. For these selfless people, it is after the guns have fallen silent, the din of battle quietened, that the real fight begins – a fight that may last for the rest of their lives."
~ HRH, Prince Harry