Tim Kerlin was a Patriot, who was taken from us suddenly this morning. A Man of conviction, who stood up for the rights of Americans, and those of us world wide. He was also instrumental in fighting The Scourge.

He was a regular Contributor at "Jihad Killer Hour," hosted by Pat Dollard on Blog Talk Radio, where his insights were deeply absorbed, and he gave us home-work to pursue the issues of the day, and he was the creator of "Halls of Valhalla" also heard on Blog Talk Radio.

Loki was my Norse God.... He will be so deeply missed, but he walks with the Angels now.

Loki-from-panokee, thanks so much for your presence within our Earthy realm. We will meet again, to ensure the mischief carries on, and that the lights of fire within the hearts of men continue. 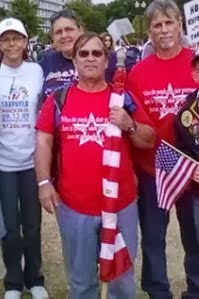 Although Tim traveled to Washington, D.C. a few times along with other BTR users, I never had the pleasure of meeting him in person.  But even so, I will be among those in our little section of the conservative side of the blogosphere who will miss him and his constitutional patriotism.  Our thoughts and prayers are with his family.