With most superheroes, when you take away the colorful costume, mask and cape, what you find underneath is a white man. But not always. In February, as part of a continuing effort to diversify its offerings, Marvel Comics will begin a series whose lead character, Kamala Khan, is a teenage Muslim girl living in Jersey City. 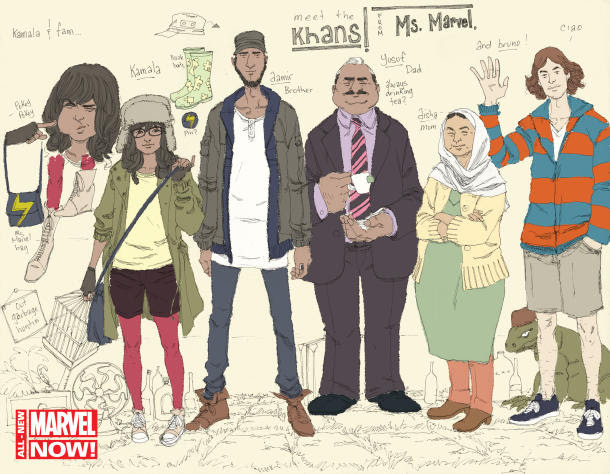 No exploding planet, death of a relative or irradiated spider led to Kamala’s creation. Her genesis began more mundanely, in a conversation between Sana Amanat and Steve Wacker, two editors at Marvel. “I was telling him some crazy anecdote about my childhood, growing up as a Muslim-American,” Ms. Amanat said. “He found it hilarious.” Ms. Amanat and Mr. Wacker noted the dearth of female superhero series and, even more so, of comics with cultural specificity.
When they told G. Willow Wilson, an author, comic book writer and convert to Islam, about their idea, she was eager to come on board as the series’ writer. “Any time you do something like this, it is a bit of a risk,” Ms. Wilson said. “You’re trying to bring the audience on board and they are used to seeing something else in the pages of a comic book.”
Kamala, whose family is from Pakistan, has devotedly followed the career of the blond, blue-eyed Carol Danvers, who now goes by Captain Marvel, a name she inherited from a male hero. When Kamala discovers her powers, including the ability to change shape, she takes on the code name Ms. Marvel — what Carol called herself when she began her superhero career.
“Captain Marvel represents an ideal that Kamala pines for,” Ms. Wilson said. “She’s strong, beautiful and doesn’t have any of the baggage of being Pakistani and ‘different.’ ”
Ms. Amanat said, “It’s also sort of like when I was a little girl and wanted to be Tiffani-Amber Thiessen,” from “Saved by the Bell.”
Kamala will face struggles outside her own head, including conflicts close to home. “Her brother is extremely conservative,” Ms. Amanat said. “Her mom is paranoid that she’s going to touch a boy and get pregnant. Her father wants her to concentrate on her studies and become a doctor.” Next to those challenges, fighting supervillains may be a respite.
The creative team is braced for all possible reactions. “I do expect some negativity,” Ms. Amanat said, “not only from people who are anti-Muslim, but people who are Muslim and might want the character portrayed in a particular light.”
But “this is not evangelism,” Ms. Wilson said. “It was really important for me to portray Kamala as someone who is struggling with her faith.” The series, Ms. Wilson said, would deal with how familial and religious edicts mesh with super-heroics, which can require rules to be broken.
Marvel’s slate of titles with female or minority leads includes an X-Men series spotlighting its women and “Mighty Avengers,” whose roster includes many nonwhite heroes. Next year two more female characters will get series: She-Hulk and Elektra.
But the quest for cultural diversity in comics is not always successful. The market can be unwelcoming to new characters and attempts at inclusion can seem like tokenism when not handled well. Then there are the firestorms: In September at DC Comics, the writers of Batwoman, announced that they were leaving the series because of editorial interference, including an edict that would prohibit the lesbian title character from marrying. Dan DiDio, the co-publisher of DC Comics, said the decision was about keeping true to the mission of the Batman characters, who have sacrificed their self-interests for the greater good. They “shouldn’t have happy personal lives,” Mr. DiDio told fans at the Baltimore Comic-Con.
In 2011, when Marvel announced that Miles Morales, a black Hispanic teenager, would take on the alter ego of Spider-Man as part of an alternative take on the character, there was an uproar by those who thought that Peter Parker, white and angst-ridden, had been replaced. (He wasn’t. Miles is part of a separate series that offers fresh takes on Marvel characters.)
The most important fan assessment, though, comes later and is easier to quantify. “Fans respond with their dollars,” said Axel Alonso, the editor in chief of Marvel Entertainment, who thinks Miles has helped bring new readers to comics. “When you see Spider-Man strip down his mask and he looks like you, you are more inspired to pick up that book.” The September issue of Miles’s series sold around 32,000 copies. The more traditional version sold around 80,000 copies, though Peter Parker is seemingly dead and Doctor Octopus is acting as Spider-Man.
As for Kamala, Ms. Wilson said the series was “about the universal experience of all American teenagers, feeling kind of isolated and finding what they are.” Though here, she adds, that happens “through the lens of being a Muslim-American” with superpowers.