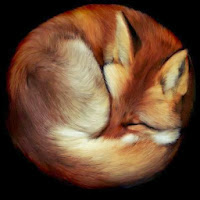 As you know, I kinda like...Foxes, so this bothers me a great deal. I know some will say that there is a culling need, but unleashing Hounds (beautiful dogs ~ I have a Plott Hound) will be cruel. Foxes will be torn to pieces alive.

Please, Prime Minister David Cameron, do not do this. There is a better way to reign in a so-called "vermin" issue. Foxes are feral and can promote health issues, but ensuring they be torn to bits by a pack of dogs is not the solution (and, farmers never abided by the "Two Dog Rule." in the first place).

David Cameron is backing calls to relax the ban on fox-hunting in England and Wales, it emerged today.

The Prime Minister has 'sympathy' with calls to scrap a law banning farmers from using more than two dogs to flush out foxes, Downing Street said.

It would mark a first step towards the coalition fulfilling its pledge to stage a free vote on repealing the controversial law altogether and follows reports of a surge in fox attacks on sheep flocks.

New evidence has been hand to the Department for Environment, Food and Rural Affairs of a growing threat to lambs from a rising fox population.

MPs from the Labour, Conservative, Liberal Democrat and Plaid Cymru parties have put pressure on Environment Secretary Owen Paterson to allow farmers to use more than two dogs to flush out foxes.

The MPs have acted after hill farmers told them that the current law has led to devastating losses of their livelihood, because they cannot get rid of the foxes which plague their flocks.

Mr Cameron's officials spokesman told journalists in Westminster: 'There is a very specific issue around pest control and the impact is has on particular farming communities, such as hill farmers.

'I think the Prime Minister has some sympathy with those concerns. They have been voiced by MPs from across the House.

'Given the cross-party nature of concerns that have been raised in this area it is something that the House may wish to consider.

'There are various ways in which the House can consider these things.'

David Thomas, secretary of the Federation of Welsh Farmers told the Daily Telegraph: 'We feel that this is something that could be very easily done.

'It is necessary for sheep farmers, it is not going to cost the government any money at all. It is a win, win situation.'
The Department for Environment, Food and Rural Affairs are said to have seen evidence that flocks are being threatened by foxes, and plan to consider a change in the law.

Under the current law, farmers are only allowed to use two dogs to flush out fox dens before shooting the foxes.
A recent study suggests that using a full pack of hounds can be almost twice as effective as using two dogs.
Fox-hunting was banned by Tony Blair's Labour government in 2004, and has long been a source of debate amongst MPs and the public.

Lifting the ban on using more than two dogs to flush out foxes would not herald a return to traditional hunting, and it is thought that many Conservatives still feel that there is not enough public support for overturning the full ban.

The coalition agreement committed to 'bring forward a motion on a free vote enabling the House of Commons to express  its view on the repeal of the Hunting Act'.

However, it is thought that a growing number of Tory and Lib Dem MPs would vote to keep the law in place, dashing the hopes of countryside campaigners that the deeply unpopular law would be axed.

A spokesman for Defra said: 'We have received reports on increased predation of lambs by foxes and the burden this has placed on hill farmers. We will look at all research into this with interest.'

"I'd bet he "has sympathy" too for sending small children up chimneys. Or even transporting slaves in shackles to the colonies. What a waste of time and political effort the past two hundred years have been."

"Sheep attacks are a lie. I had a farm in Wales and I've seen foxes wandering amongst sheep and lambs, even laying amongst them in the sun - the sheep showing no anxiety whatsoever. Yet the moment a dog appears, the sheep run away in fear."

"Land-owning gentry need pacified again eh? No fox-hunting means no fox-hunting! Farmers are still legally allowed to use their firearms to kill problem fox's and they do, regularly, and effectively - to my knowledge (as some friends are farmers with sheep). There are no logical grounds to allow fox-hunting by red-coated toffs on their horses with packs of braying dogs. It's inhumane and totally not what we want or need in the 21st Century."

"They're not "flushed out." THEY'RE RIPPED APART WHILE STILL ALIVE. Cameron, I despise you."