The Road to Damascus

This is a brilliant article by Sultan Knish.... The Road to Damascus


The Road to Damascus

Posted by Daniel Greenfield @ the Sultan Knish blog
In 2007, the new Democratic Majority Leader defied President Bush by sitting down to meet with a member of the Axis of Evil. 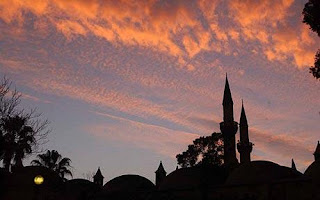 "We came in friendship, hope, and determined that the road to Damascus is a road to peace," Pelosi told reporters after her talks with Assad.

Now the road to Damascus is the road to war. And Pelosi and Obama are racing down it along with everyone else.

Bob Hope, Bing Crosby and Dorothy Lamour are nowhere to be found striding insouciantly through the desert or hoofing it alongside a camel. This road movie has an entirely different cast of characters.

It's a race against time. And a race for blood.

Forget the Grand Prix or the Daytona 500, the real race right now is the race to Damascus. The racers include Syrian rebels in pickup trucks with mounted machine guns and homemade tanks, toting weapons and equipment supplied and paid for by Qatar and Turkey, and more covertly by the British and French intelligence services. Racing along with them are carloads of international diplomats urging their governments to give the militias more money and more weapons.

Everyone is on the road to Damascus in this amazing race. Christian refugees from Aleppo and Alawites packing in behind the tanks of the Syrian army, Iraqi militias that used to plant IEDs in front of American Humvees who have found new work blowing up churches and taking over Syrian bases....

Read the rest HERE: http://sultanknish.blogspot.ca/2013/09/the-road-to-damascus.html?utm_source=feedburner&utm_medium=email&utm_campaign=Feed:+FromNyToIsraelSultanRevealsTheStoriesBehindTheNews+(from+NY+to+Israel+Sultan+Reveals+The+Stories+Behind+the+News)
Posted by Red Fox at 4:33 AM