It is short notice, but for GTA Readers, please try to be there... 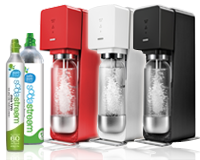 Sodastream provides good jobs to hundreds of Arabs in Judea/Samaria, but radical anti-Semitic/anti-Israel groups are trying to intimidate a Canadian Tire dealer in Hamilton, Ontario, Canada into not carrying their environmentally-friendly, socially-responsible products. Help us fight back against the lies by joining us at an Israel Truth Week Vigil, Sat. Sept 21, 11-1pm. to counter their planned picketing.
BACKGROUND: Anti-Israel groups are calling for the picketing at the Canadian Tire on Queenston Road in Hamilton (Stoney Creek) that sells Israeli-made Sodastream products, to take place this Saturday, Sept 21, 11am to 1pm. See copy of their announcement below. They have been harassing the owner in order to force him not to stock Israeli goods, all based on outrageous allegations of stolen land, ethnic cleansing and deprivation of Arab livelihoods. This Sodastream video tells the inspiring truth:
SodaStream: Building Bridges: http://www.youtube.com/watch?v=zl85AL1l0H0 [8:27]