The MOSLEM Brotherhood IS a Terrorist Organization

Sahih Bukhari: Vol 9: 84: 64: So, wherever you find them [Unbelievers/non-Muslims], kill them, for whoever kills them shall have reward on the Day of Resurrection.... 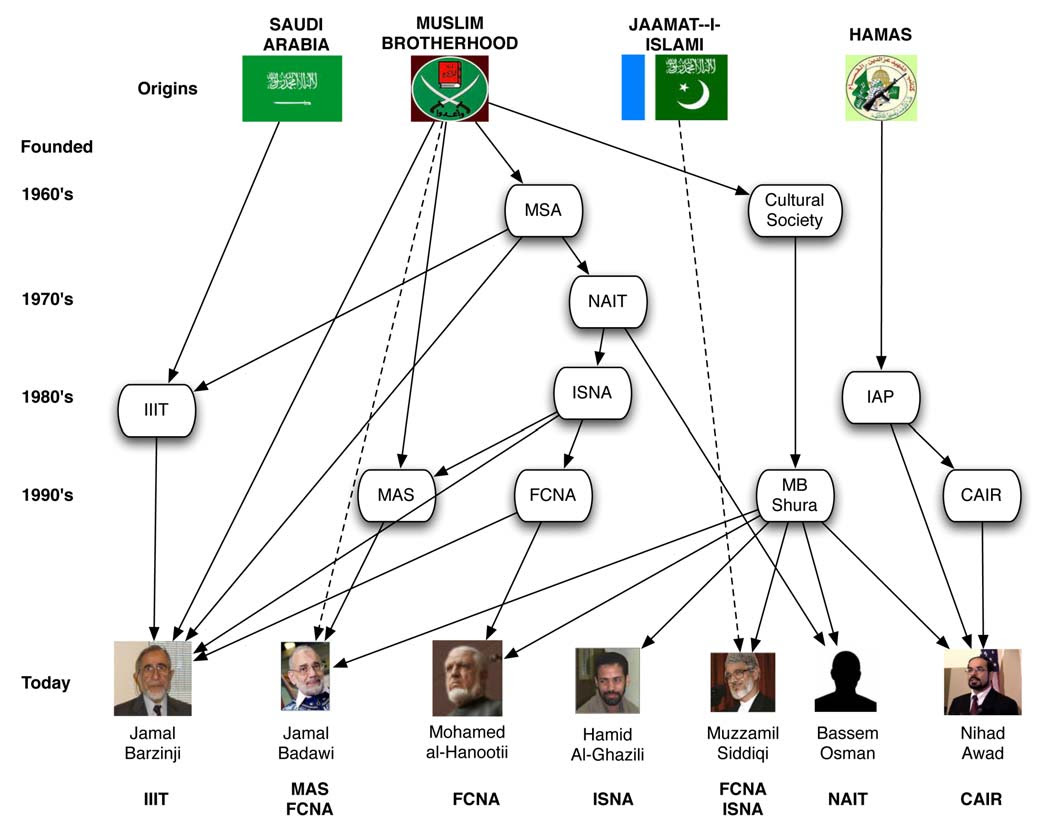 What is the Muslim Brotherhood? The Muslim Brotherhood is the mother ship for the jihadi ideologies and terrorist organizations spread across the Arab world and beyond.  Hassan al-Bannafounded the Muslim Brotherhood in the city of Ismailia in March 1928 along with six workers of the Suez Canal Company, as a Pan-Islamic, religious, political, and social movement.
Like the Muslim Brotherhood’s representative in the Palestinian Mandate; the Grand Mufti of Jerusalem Haj Amin al-Husseini (the founder of the Palestine-Israel conflict, the initiator of the holocaust and the Islamic genocide of Jews in the 20th Century) himself a direct Arab spokesmen for the Third Reich during the war, Hassan al-Banna likewise openly acknowledged the common interests with National Socialist anti-Jewish and anti-Zionist politics, and actively collaborated with the Nazis.

Hassan was solicited by Nazi intelligence when Hitler rose to power in the 1930s. He established a Nazi Germany spy network throughout the Arabian Peninsula for Hitler. Al Banna promised Hitler that when Gen. Rommel’s panzer division arrived in Cairo and Alexandria, the Muslim Brotherhood would ensure that all of the British troops would be killed.
The Brotherhood’s credo was and is, “Allah is our objective; the Quran is our law, the Prophet is our leader; Jihad is our way; and death for the sake of Allah is the highest of our aspirations.” In the group’s belief, the Quran and Sunnah constitute a perfect way of life and social and political organization that God has set out for man. They believe all Islamic governments must be based on this system and eventually be unified in a Caliphate. Across Arabia today most of the imam’s are Muslim Brotherhood supporters, according to statements in media. Not good news for the Arab royal families.
.

A White House “We the People” petition asking the Obama administration to designate Egypt’s Muslim Brotherhood as a terrorist organization has garnered 187,957 signatures in 30 days – nearly double the number of signatures required for petitions to earn an official response from the Obama administration.The petition was posted on the White House website on July 7, just days after the Egyptian military ousted President Mohamed Morsi, a member of the Muslim Brotherhood and Egypt’s first democratically elected president.
“Muslim Brotherhood has a long history of violent killings & terrorizing opponents,” the petition states. “Also MB has direct ties with most terrorist groups like Hamas.” (The Muslim Brotherhood, which spawned the Palestinian terrorist group Hamas in 1987, springs from anti-Israel, anti-American roots.)
The petition notes that the Islamist group “has shown in the past few days that it is willing to engage in violence and killing of innocent civilians in order to invoke fear in the hearts of its opponents.”
In recent weeks, Morsi’s Islamist backers have rejected negotiations with Egypt’s military-backed government, and tens of thousands of them are waging daily protests, setting the stage for more deadly confrontations with authorities.

“This is terrorism,” the petition states. “We ask the U.S. government to declare MB as a terrorist group for a safer future for all of us.”
Morsi, elected president in June 2012,  was supported by the Obama administration until protests seeking his removal from office broke out in Egypt earlier this summer.
After Morsi was removed, Obama said he was “deeply concerned” by the military action. The U.S. State Department on Monday repeated that it is “continuing to engage with all parties to push towards an inclusive, democratic process.” The U.S. says it is “very concerned” about the situation in Egypt, and it is urging all parties to work toward a peaceful resolution.
The State Department says it “monitors the activities of terrorist groups active around the world” and has the authority to designate groups as a Foreign Terrorist Organization or FTO “in accordance with section 219 of the Immigration and Nationality Act (INA), as amended.”
Once a target group is identified, the State Department prepares a detailed “administrative record,” typically including both classified and open sources information, demonstrating that the statutory criteria for a terrorist designation have been satisfied.

If the Secretary of State, in consultation with the Attorney General and the Secretary of the Treasury, decides to make the designation, Congress is notified of the Secretary’s intent to designate the organization and given seven days to review the designation, as the INA requires.
“Upon the expiration of the seven-day waiting period and in the absence of Congressional action to block the designation, notice of the designation is published in the Federal Register, at which point the designation takes effect,” the website states.
As of Sept. 28, 2012, the State Department has a list of 51 FTOs, including Hamas, Hezbollah, Palestine Islamic Jihad, and multiple al-Qaeda groups around the world.
When asked if the Obama administration would respond to the petition, the White House referred CNSNews.com to Frequently Asked Questions on the “We the People” site. These include the fact that every petition, with some exceptions, that reaches the numerical threshold will get a response – with the caveat that there may be delays given the volume of petitions.
But sometimes the White House is quick to respond to petitions, especially when the topic is a priority for President Obama.
For example, after the Dec. 14 attack at Sandy Hook Elementary School in Newtown, Conn., it took the White House only seven days to respond to petitions calling for gun bans.  The Dec. 21 response came in the form of a video address by the president.
“We started ‘We the People’ so that you could directly petition your government on the matters you care about the most, so you could make your voice heard,” Obama said in the video.”
“And in the days since the heartbreaking tragedy in Newton, Conn., hundreds of thousands of you from all 50 states have signed petitions asking us to take serious steps to address the epidemic of gun violence in this country,” Obama said. “So I just wanted to take a minute today to respond and let you know, we hear you.”

This extremist movement has branches spreading in all directions, like cancer.