I don't think I need to expand too deep on how this makes me feel, because anybody in their right mind will feel the same - outraged. What was on the minds of the Editors when they decided to go with this photo of an "alleged" terrorist (and, it is alleged, as he has not been convicted - yet).

A popular magazine is creating quite an uproar for the person featured on the cover.
Boston Marathon bombing suspect Dzhokhar Tsarnaev will grace the cover of Rolling Stone magazine next month, according to CNN.

The cover shows a picture he took of himself. The story even promises to describe, “How a charming kid with a bright future became a monster.”
Tsarnaev has pleaded not guilty to 30 counts related to the bombings, which killed three people and injured more than 260 others.
The cover is receiving backlash on Twitter and Facebook, some calling it a “glamorization” of Tsarnaev.
As controversial as the cover seems, it isn’t the first time Rolling Stone has pushed the envelope. According to CNN, the magazine’s June 1970 cover featured serial killer Charles Manson. 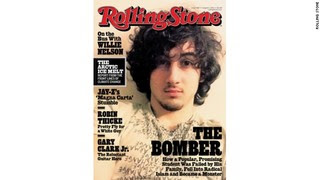