...Is this guy barking mad? What's the motive here???... What the Hell is he endorsing/inviting to the UK???


Nigel Farage calls for Syrian refugees to be allowed into UK ~ December 29, 2013 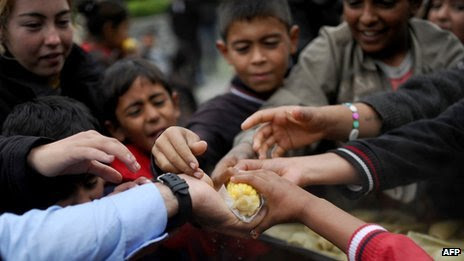 The UN says more than half of Syrians need food, water and medical aid
David Cameron, Ed Miliband and Nick Clegg said the fate of a Syrian generation "hangs in the balance" with four million children caught up in the civil conflict.
The leaders said the UK would add to the £523m it had already committed and urged other nations to do the same.
Continue reading the main story


Where Syrian refugees are

(Source: UN High Commissioner for Refugees)
The UK says its aid is providing support including food, medical care and relief items for people in Syria and to refugees in Lebanon, Jordan, Turkey and Iraq.
The government said while it has no plans to resettle or provide temporary protection to Syrian refugees, it was giving "as much help as possible" to people in the region and its £500m pledge was "more than the other EU member states combined".
It said more than 1,100 Syrian nationals had been granted asylum in the year up to September, and asylum claims would be considered "on their merits and in line with the immigration rules".
Health minister Dan Poulter told the BBC: "It's a very complex issue in Syria, as we know, and there are great concerns over the human rights issues there. The line the government is taking at the moment is the right one."
But former Liberal Democrat leader Sir Menzies Campbell told the BBC earlier this week the UK had a "responsibility" to help those affected.
"It would be entirely reasonable for the UK to take its share of responsibility for refugees and I think it's unfortunate - to put it as mildly as I possibly can - that we have closed our minds to that possibility, when other countries in Europe have taken a much more generous position," he said.
Mark Pritchard, Conservative MP, told BBC Radio 4's The World this Weekend he expected the government to change its mind - either "willingly or unwillingly".
"Clearly we can't take all the refugees but we should play our part as an open-hearted, compassionate country," he said.
"There's real suffering and we need to do our bit along with the rest of the international community."
Fellow Tory MP Andrew Brigden told the same programme he believed Mr Farage's comments were "political tokenism".
"You're talking about a few hundred [people] out of a few million," he said. "What criteria would we use to say who can come and who can't?
"What we need is a politically-negotiated solution to this problem."
In a report released earlier this month, Amnesty International accused European Union leaders of "miserably failing" to provide a safe haven to Syrians. Ten member states have offered to take in refugees and only 12,000 people, it said.
Italy - like the UK - has offered no places at all, the organisation said.
Anna Musgrave, of the charity the Refugee Council, welcomed Mr Farage's comments, saying this was something it had been calling for.
"We really hope that David Cameron listens to these people, listens to the likes of Nigel Farage, and acts on it."
More than 100,000 people are estimated to have been killed since the unrest began in Syria more than two years ago, according to the United Nations.
~~~~~~~~~~~~~~~~~~~~~

They kill animals for kicks too, Nigel