Oh, REALLY? A Burka-Clad Terrorist? Say it aint So!

Terror suspect on the run: Did Somalian escape in a burka from mosque prayers? ~ November, 4, 2013

A suspected Islamist terrorist supposedly under close monitoring has gone on the run.

Somalian-born Mohammed Ahmed Mohamed is believed to have evaded police observation by dressing up in a burka.
The 27-year-old went to pray at a mosque in West London on Friday and has not been seen since, Scotland Yard announced last night.

Police released CCTV pictures of the man, apparently wearing the traditional garb. Scotland Yard refused to comment on the offences he is suspected of.

However they said he was not ‘a direct threat to the public.’

His escape will prompt renewed political debate about the role of the appropriateness of Islamic dress in British life.
It follows a court case earlier this year in which a woman was required to show her face to jurors and the judge while giving evidence.

Mohamed is one of a small number of terror suspects whose movements are restricted by a court order because of the threat they pose to the public.

Worryingly, he is the second person under a Terrorism Prevention and Investigation Measures notice to have absconded in the past year. Nine such orders are in force.


It follows the disappearance on Boxing Day of Ibrahim Magag who failed to return home on time to comply with his curfew. He has still not been found.


The Metropolitan Police said Mohamed attended the An-Noor Masjid Mosque in Acton, West London, at 10am on Friday.

He was seen inside the mosque at 3.15pm. A spokesman said he changed into Islamic clothing and ‘has not been seen since’. 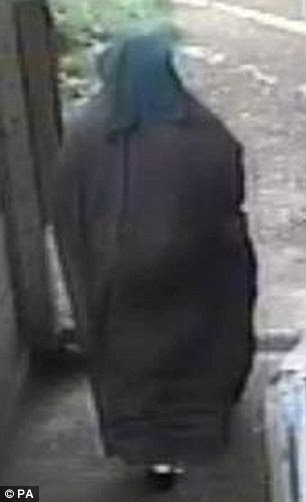 ‘Ports and borders were notified with his photograph and details circulated nationally. Public safety remains our priority.’ He said anyone who sees him should call 999.
Mohamed is described as 5ft 8ins tall and of medium build.

Magag, 28, was the first person to go missing while on a TPIM. It was later claimed he fled simply by jumping into a black cab. The case prompted a review of how such terror suspects are monitored.

TPIMS are a watered down form of control order which allow the courts to place restrictions on a terror suspect’s behaviour.

They can be required to obey a curfew, are banned from mixing with named individuals and using the internet.
Control orders were watered down in 2011 following demands from the Lib Dems who said they breached civil liberties.

Security Minister James Brokenshire said: ‘National security is the Government’s top priority and the police are doing everything in heir power to apprehend this man as quickly as possible.

‘The police and security services do not believe that this man poses a direct threat to the public in the UK.

‘The Home Secretary, on police advice, yesterday applied to the High Court for an order protecting anonymity to be lifted in order to assist with their investigation.’