Ban The Burka (will it happen in the UK?)

In light of the recent disclosures of Shaheeds ("martyrs") escaping wearing the damned things, I'm in for a ban more than ever...

Outspoken Ryanair chief executive Michael O’Leary has called for the burka to be banned in the UK and claimed the country is “leaning over far too much for some of these minority religions.


Speaking to The Times, he said: “I think we should ban burkas here in the UK. If you go to Saudi Arabia and they say the ladies have to veil up, you respect the local culture.

“If you want to come and live in Western society, I don’t think you should be allowed to walk around with some inalienable right to cover yourself up with only your eyes looking out.”

Ryanair has recently hit the headlines after introducing fully allocated seating on all flights. The announcement came as its annual profits are set to fall for the first time in five years, with the firm admitting that its “abrupt culture” may have become a problem.

O’Leary also told The Times that he does not believe in global warming, although he does not refute that climate change is happening.

“Temperatures have been moving up and down for 200 years yet every time you have a couple of warm summers they go — “Oooh, global warming’,” he said.

“There’s a degree of arrogance in thinking that any man-made phenomenon is going to change nature. Trying to reverse it by taxing air travel is absurd. We should encourage more driving and flying around because that kind of economic activity is what generates great wealth.” 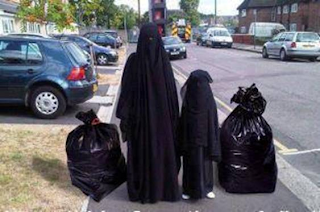 This is by far not the first time the Irish businessman, who founded Ryanair in 1985, has courted controversy.

Famous O’Leary quotes include: “You're not getting a refund so **** off. We don't want to hear your sob stories. What part of 'no refund' don't you understand?”

And: “Nobody wants to sit beside a really fat bastard on board. We have been frankly astonished at the number of customers who don't only want to tax fat people but torture them.”