"Allah" Found at the Bottom of a Box of Crunchies. (What About the Sea?)

OMG, I'm sorry, but this is the clap-trap that passes for news within the islamic world on MSM? Oh, and Dear Ole Dad found a message from Allah written inside a tomato. That's one helluva family. I imagine they'll get rock-star status at the next Moon-rock Worship Meeting in Mecca next year.

Mama must be so proud of her little Shaheed. 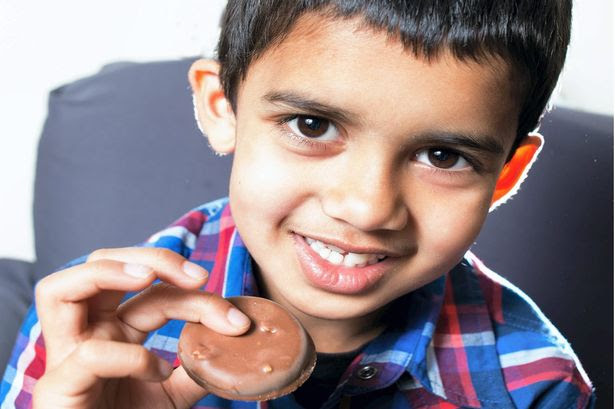 Amazingly, this isn’t the first time the family has received a mysterious message - his dad has found Allah written inside a tomato (Was it rotten?)
A schoolboy was stunned to find the word 'Allah' on the last chocolate biscuit in the packet.
Little Imran Abdur-Rahman, seven, spotted the Arabic letters in his Cadbury's Crunchie biscuit he was about to scoff.
Dad Mohammed, 36, who took the picture, told the Manchester Evening News: “He recognised it straight away and came running to me.
"I looked at it and I was surprised to see that was exactly what it was.
"Imran is not very patient and when he'd shown it to me he said 'dad, give it back now. I want to eat it.'
“It all happened quite quickly, I was not thinking at all, but I did manage to hold on to it for a while.”
Amazingly, this isn’t the first time the family has received a mysterious message from God.
In 1997 dad Mohammad found ‘Allah’ inside a tomato while working at his brother’s takeaway in Bolton.
But the dad-of-four, who lives in Chadderton, Greater Manchester, has modestly shrugged off his discoveries.
“These things happen now and then,” the human resource manager said.


The latest discovery is one of a series of mysterious markings found on fruit, vegetables and even fish, which appear to resemble religious calligraphy.
In 2006 a pet shop owner in Rossendale, Lancashire, claimed to have spotted the Arabic script on the body of a tropical fish.
And in 2011 a Scottish woman found ‘Allah’ in a potato while peeling spuds to make samosas.
A man from Salford also claims to have  snapped the face of Jesus in his frying pan after burning a pancake in 2010.
Commenting on the discoveries, Mohammed added: “It’s very interesting.
“When I worked in my brother’s takeaway we sliced open a tomato and there it was, as clear as daylight. We kept it for a while and people came to have a look at it and touch it.
“We believe in God and that he can reveal himself in many different ways, but I never imagined it to be in a biscuit.”
A spokesman for confectionery giant Cadbury’s did not want to comment on the discovery. (Wonder why... Worried about a boycott from sane consumers?)