It never seems to stop rolling, folks. ANOTHER one bites the dust? We have to stop this islamity in our TAX FUNDED public schools. 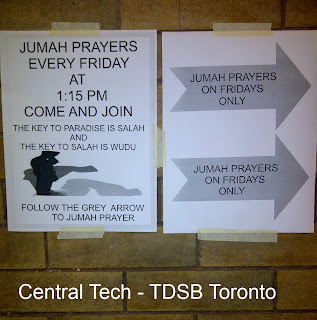 CONTACT LIZ SANDALS, Provincial Minister of Education (Ontario, Canada) and DEMAND an end to this.

Several faith-based groups protested outside the Toronto District School Board’s headquarters Monday over Muslim prayers taking place in a Toronto school.
For three years, hundreds of students have been praying in the cafeteria at Valley Park Middle School during their lunch hour. The school doesn’t run or pay for the service.
TDSB director of education Chris Spence said the decision to hold the prayer sessions was made in consultation with the school community.
The service is operated by members of the Valley Park community, and was un-opposed by parents of other students at the school before Ron Banerjee, claiming to represent a group called the Canadian Hindu Advocacy, began complaining earlier this year.
“When you have 400 students coming in and out of class…it’s extremely disruptive,” said Banerjee, who organized Monday’s protest. “It’s discriminatory.  It raises lots of questions in terms of ‘Why are Muslims alone being allowed to do this?’ This is part of the Islam-ification of society.”
Members of the Jewish Defence League of Canada and the Christian Heritage Group also took part in the protest.
80 per cent of Valley Park students are Muslim, and the school began the Friday services to prevent students from missing classes to pray at a nearby mosque.
The TDSB defended the sessions, saying it’s simply trying to accommodate the religious beliefs of its many Muslim students, as mandated by the Ontario Human Rights Code.
It said the issue is not one about religion in schools but about religious accommodation.
“We have a predominantly Muslim population in the student body, so the parents were asking for a space where we can provide for Friday prayers,” board trustee, Shaun Chen previously told CityNews.
Banerjee doesn’t buy it.
“If they want to accommodate the Muslim students, they get a one hour lunch break, the mosque is five minutes away, they can just tell them to pack a lunch and during your one-hour break go off to the mosque.”
In the meantime, Canada’s largest Hindu group, Canadian Hindu Network, says the views of the Canadian Hindu Advocacy are not representative of mainstream Hindus.
Click on the video to view Francis D’Souza’s story. You can follow Francis on Twitter@CityFrancis . http://www.citynews.ca