Another Reason to Restrict Moslems from Sensitive Positions

Posted on October 3, 2013 by creeping http://creepingsharia.wordpress.com/2013/10/03/fbis-rogue-l-a-field-office-has-a-muslim-mole/
via FBI’s rogue L.A. field office has Muslim mole.
The FBI field office that defied clear and direct orders from Washington headquarters to “cease contact” with a terrorist front group at the same time allowed a Muslim agent investigated for compromising a major terrorism case to remain on the squad, WND has learned.
After the FBI banned the Council on American-Islamic Relations from its counterterror outreach programs in response to evidence the group fronts for the Muslim Brotherhood and its Palestinian terrorist branch Hamas, the FBI’s Los Angeles field office liaisoned with CAIR in violation of official policy, according to a just-released report by the Justice Department’s inspector general.
Several directives sent from FBI headquarters required all of the bureau’s field offices to “cease contact with CAIR as an organization,” yet the L.A. office refused to comply with the command and even sent out an internal email advising personnel to ignore it.
GOP Rep. Frank Wolf, whose House judiciary subcommittee oversees the FBI’s budget, wants officials there fired.
“This is insubordinate behavior,” Wolf wrote the FBI director. “The findings in this report suggest the FBI may have a systemic problem.”
In fact, that same rogue L.A. field office happens to employ Muslim agents sympathetic to CAIR – including an Egyptian-American agent investigated for allegedly compromising a national counterterror probe that involved cells in Los Angeles, New York and Boston.
The Muslim FBI agent in Los Angeles allegedly tipped off the ringleader of a Pakistani-based terror cell that the local Joint Terrorism Task Force had it under surveillance for more than two years.
According to law enforcement officials attached to the multi-agency JTTF in Los Angeles, the “dirty” agent was a family friend of the counterterrorism target, who trained dozens of young Muslim men for jihad at his mosque in the Los Angeles suburbs while arranging for more advanced training for the jihadists at Taliban-run camps in Pakistan.
Allegedly, the agent not only alerted the suspect to “trash covers” performed outside his home by investigators, but also identified surveillance vehicles for him.
Despite compromising this and other investigations and betraying fellow law enforcement officers, the agent was allowed to stay on the job following a bureau reprimand.
CAIR, whose leaders and founders have been tied to Hamas, have enjoyed untold access to this same Los Angeles office, even as CAIR remains an unindicted co-conspirator in the largest terror finance case in U.S. history.
The recent Los Angeles scandal, which was first reported in the bestselling book,“Muslim Mafia,” is similar to an internal security breach that took place a few years ago at the Fairfax County, Va., Police Department, which is a key member of the Washington-based JTTF.
Former FCPD Sgt. Mohammad Weiss Rasool ( http://www.investigativeproject.org/664/fairfax-cop-who-tipped-terror-suspect-helped-kill-training ) tipped off a Muslim suspect under investigation for terrorism about FBI surveillance. He illegally searched a federal police database to ID the unmarked cars tailing his Muslim friend. He also alerted him to a planned raid on his house. The suspect, in turn, destroyed incriminating evidence as agents moved in. 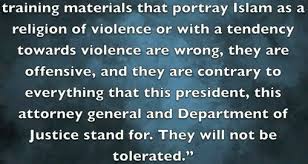 Rasool was CAIR’s representative on the police force. As he was spying for the enemy and obstructing federal investigations, he met privately with CAIR Executive Director Nihad Awad at CAIR’s headquarters in Washington, according to “Muslim Mafia.”
In 2008, Rasool was convicted of breaching the National Crime Information Center (NCIC) database at least 15 times to alert fellow Muslims under surveillance.
“He was their plant,” a FCPD official said. “We were convinced he was recruited by the Muslim Brotherhood.”
Another Egyptian-born FBI agent and suspected Muslim Brotherhood “plant” – Gamal Abdel-Hafiz – aided a Muslim Brotherhood leader suspected of terrorism. Not long after 9/11, Abdel-Hafiz was investigated for refusing to secretly record now-convicted terrorist Sami al-Arian during the FBI’s case against him.
What’s become of this rogue Muslim agent?
Abdel-Hafiz is still on the job, though he’s been transferred from Washington to the Dallas field office. Remarkably, his new role in the bureau includes recruiting other agents and Arabic linguists at conferences held by known Muslim Brotherhood front groups, including the Islamic Society of North America and the Muslim Students Association.
H/T to Creeping Sharia http://creepingsharia.wordpress.com