CHRISTIANS: Why the Silence?

I have pondered - and have become disconcerted, then flabbergasted over the overwhelming silence by Christians regarding the latest onslaught of murder of us at the hands of Islamists. Where are you?


A Global Slaughter of Christians, but America’s Churches Stay Silent

Christians are being singled out and massacred from Pakistan to Syria to the Nairobi shopping mall. Kirsten Powers on the deafening silence from U.S. pews and pulpits.

Christians in the Middle East and Africa are being slaughtered, tortured, raped, kidnapped, beheaded, and forced to flee the birthplace of Christianity. One would think this horror might be consuming the pulpits and pews of American churches. Not so. The silence has been nearly deafening.

As Egypt’s Copts have battled the worst attacks on the Christian minority since the 14th century, the bad news for Christians in the region keeps coming. On Sunday,Taliban suicide bombers killed at least 85 worshippers at All Saints’ church, which has stood since 1883 in the city of Peshawar, Pakistan. Christians were also the target of Islamic fanatics in the attack on a shopping center in Nairobi, Kenya, this week that killed more than 70 people. The Associated Press reported that the Somali Islamic militant group al-Shabab “confirmed witness accounts that gunmen separated Muslims from other people and let the Muslims go free.” The captives were asked questions about Islam. If they couldn’t answer, they were shot.
In Syria, Christians are under attack by Islamist rebels and fear extinction if Bashar al-Assad falls. This month, rebels overran the historic Christian town of Maalula, where many of its inhabitants speak Aramaic, the language of Jesus. The AFP reported that a resident of Maalula called her fiancé’s cell and was told by member of the Free Syrian Army that they gave him a chance to convert to Islam and he refused. So they slit his throat. 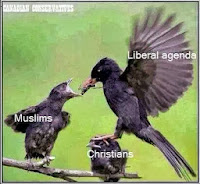 Nina Shea, an international human-rights lawyer and expert on religious persecution, testified in 2011 before Congress regarding the fate of Iraqi Christians, two-thirds of whom have vanished from the country. They have either been murdered or fled in fear for their lives. Said Shea: “[I]n August 2004 … five churches were bombed in Baghdad and Mosul. On a single day in July 2009, seven churches were bombed in Baghdad … The archbishop of Mosul, was kidnapped and killed in early 2008. A bus convoy of Christian students were violently assaulted. Christians … have been raped, tortured, kidnapped, beheaded, and evicted from their homes …”
Lela Gilbert is the author of Saturday People, Sunday People, which details the expulsion of 850,000 Jews who fled or were forced to leave Muslim countries in the mid-20th century. The title of her book comes from an Islamist slogan, “First the Saturday People, then the Sunday People,” which means “first we kill the Jews, then we kill the Christians.” Gilbert wrote recently that her Jewish friends and neighbors in Israel “are shocked but not entirely surprised” by the attacks on Christians in the Middle East. “They are rather puzzled, however, by what appears to be a lack of anxiety, action, or advocacy on the part of Western Christians.”
As they should be. It is inexplicable. American Christians are quite able to organize around issues that concern them. Yet religious persecution appears not to have grabbed their attention, despite worldwide media coverage of the atrocities against Christians and other religious minorities in the Middle East.
It’s no surprise that Jews seem to understand the gravity of the situation the best. In December 2011, Britain’s chief rabbi, Lord Jonathan Sacks, addressed Parliamentsaying, “I have followed the fate of Christians in the Middle East for years, appalled at what is happening, surprised and distressed … that it is not more widely known.” “It was Martin Luther King who said, ‘In the end, we will remember not the words of our enemies, but the silence of our friends.’ That is why I felt I could not be silent today.”Yet so many Western Christians are silent. In January, Rep. Frank Wolf (R-VA)penned a letter to 300 Catholic and Protestant leaders complaining about their lack of engagement. “Can you, as a leader in the church, help?” he wrote. “Are you pained by these accounts of persecution? Will you use your sphere of influence to raise the profile of this issue—be it through a sermon, writing or media interview?”
There have been far too few takers.
Wolf and Rep. Anna Eshoo (D-CA) sponsored legislation last year to create a special envoy at the State Department to advocate for religious minorities in the Middle East and South-Central Asia. It passed in the House overwhelmingly, but died in the Senate. Imagine the difference an outcry from constituents might have made. The legislation was reintroduced in January and again passed the House easily. It now sits in the Senate. According to the office of Sen. Roy Blunt (R-MO), the sponsor of the bill there, there is no date set for it to be taken up.
Wolf has complained loudly of the State Department’s lack of attention to religious persecution, but is anybody listening? When American leaders meet with the Saudi government, where is the public outcry demanding they confront the Saudis for fomenting hatred of Christians, Jews, and even Muslim minorities through their propagandistic tracts and textbooks? In the debate on Syria, why has the fate of Christians and other religious minorities been almost completely ignored?

In his letter challenging U.S. religious leaders, Wolf quoted Lutheran pastor Dietrich Bonhoeffer, who was executed for his efforts in the Nazi resistance:  “Silence in the face of evil is itself evil. Not to speak is to speak. Not to act is to act.”
That pretty well sums it up.
Like The Daily Beast on Facebook and follow us on Twitter for updates all day long.
Kirsten Powers is a columnist for The Daily Beast. She is also a contributor toUSA Today and a Fox News political analyst. She served in the Clinton administration from 1993 to 1998 and has worked in New York state and city politics. Her writing has been published in The Wall Street Journal, USA Today,New York Post, The New York Observer, Salon.com, Elle magazine, and American Prospect online.
For inquiries, please contact The Daily Beast at editorial@thedailybeast.com.
(H/T Eliza Jane of Mp91 FreedomQuest, Radio Jihad Network: http://www.radiojihad.org/index.html
Posted by Red Fox at 4:06 PM