Just End It ~ Nidal Hasan is going to Hell Anyway

I have pondered this myself and wondered about the lesser of two sentences ~ death or a life in solitary? No, just end it ~ remove this Scourge unleashed upon the condition called Humanity as soon as possible...

H/T to Monkey in the Middle: http://findalismonkeyinthemiddle.blogspot.ca/2013/08/what-is-proper-sentence-for-nidal-hasan.html?utm_source=feedburner&utm_medium=email&utm_campaign=Feed:+MonkeyInTheMiddle+(Monkey+in+the+Middle)

August, 27, 2003
What is the Proper Sentence for Nidal Hasan?
Gary Fouse
fousesquawk: http://garyfouse.blogspot.com

We will shortly know what the military jury decides should be the fate for Nidal Hasan, death or life imprisonment. Surprisingly, many are guessing that the jury will decide that life imprisonment with no possibility of parole is a harsher sentence than the death that Hasan apparently craves. After all, in his paralyzed condition, life in a cell trapped in a wheelchair and having to wear diapers for another 40 or so years is nothing to look forward to. Hasan thinks that with a death sentence, he will achieve martyrdom and go to Paradise, where he will be entertained by 72 virgins.

There are 13 jurors. If only one of them decides that Hasan would suffer more with a life sentence, that's what it will be. It must be unanimous for death.

Personally, I support the death penalty for premeditated murder and if this case doesn't merit the death penalty, few do. There is no worry that just maybe an innocent man has been convicted. He proudly admits it and was captured in the act anyway.

Were I to believe that Hasan's vision of martyrdom and paradise was true, I would say give him life imprisonment and let him rot to death in ignominy. However, I don't believe that for one moment. On the other hand, we have seen too many cases where life imprisonment turns into eventual freedom. In the case of the Blind Sheikh, we had been worrying about Egyptian president Mohammad Morsi pressuring President Obama to release this evil man who is sentenced to life in a US prison for plotting terror acts against us. (Fortunately, that worry has been removed courtesy of the Egyptian military.) Who is to say that some future president may find it expedient to placate some Middle East dictator-or hostage-taking terrorists- and turn Hasan loose? 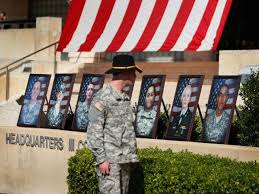 In addition, even with a death sentence, appeals will take several years. Since it is only military and federal courts involved here, the process probably won't take as long as state-originated appeals do. Timothy McVeigh may be a closer template. Hasan will still have to spend some years sitting in his wheelchair and soiling his diaper before justice is administered.

Assuming most of his victims and their survivors want to to see the death penalty applied here, I think that is the fitting punishment. He has gotten his trial and the world has seen that we have a justice system that works better than any other-imperfect as it is.  Hasan will eventually learn that his soul is not going where he thinks it is.

Monkey in the Middle

"Where the truth is always caught!"