This is courtesy of Vlad Tepes: http://vladtepesblog.com/2009/03/04/guilty-charge-on-fecal-jihad-case-uk/#comments

Please, be mindful that the islamists know no bounds... (RFB)

Posted on March 4, 2009 by Eeyore
Vlad recently did its first reluctant post on a phenomenon so disturbing we preferred not to report on at all. The now several accounts of Muslim immigrants contaminating food stuffs and other materials with their own fecal matter and general excreta. Despite having read numerous reports on arrests and suspicions we just felt it was better to let this one go. After all, until you have an actual conviction this sort of thing is just to hard to believe and we as a source of information would lose credibility despite the facts of the matter. Here is a video from before the conviction:
So today there was an actual conviction. From the BBC news, themselves no stranger to reporting on shit:

An Algerian chemist has been found guilty at Bristol Crown Court of contaminating food and wine by using his own urine and faeces.
Sahnoun Daifallah, 42, of Bibury Road, Gloucester, was found guilty of four counts of contaminating goods at four businesses in May 2008.
Daifallah, who had defended himself, had pleaded not guilty to all charges.
Sentencing was adjourned to allow preparation of psychiatric reports. Daifallah is likely to be deported.
Judge Carol Hagen said: “I find this a very worrying case and the circumstances are alarming.”
She warned Daifallah that if he did not cooperate with authorities in creating pre-sentence reports, it would “reinforce my conclusion that I find you to be a potentially very dangerous man”.
The court had heard the Algerian-born chemist sprayed the mixture in the Air Balloon Pub, in Birdlip, near Cheltenham on 14 May.
He then moved on to the Waterstones bookstore in Cirencester, Tesco in Quedgley and Morrisons in Abbeydale.
The court heard shoppers and staff in both stores saw Daifallah with a black lap top computer with a vapour coming from the bag being sprayed on the shelves

As the earlier post on this issue links to, this would appear to be a tactic right out of the Al Queda handbook. So one cannot accuse these people of being illiterate. Having crappy taste in books perhaps.
Also, be apprised ~ they are capable of contaminating our pharmaceutic products as well: They are poised to eradicate us... Watch this 12 minute video, sent courtesy of an RFB Contributor: https://www.youtube.com/watch?v=WWSxFSbJqQI&feature=player_embedded#at=411 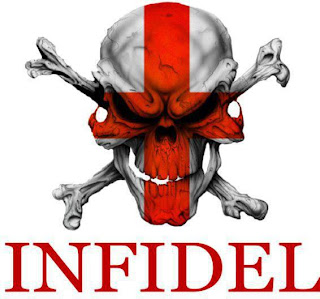