Wrong Side of the Street (by Daniel Greenfield) 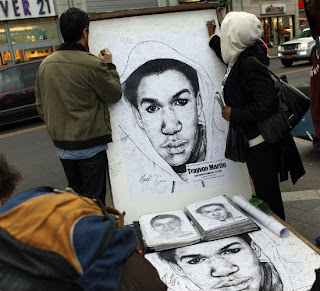 Neighborhood watches don't have to turn violent, but they exist because of the potential for violence in a society with plenty of law, but little order. The struggling middle class looks to the cops only to realize that the cops have their own job and it isn't to protect them, it's to protect each other. And so they become cops. It's vigilantism of a sort and it's a symptom of social collapse. But it's also the attitude that helped make the United States happen.That's the real story behind the headlines, the agitprop and the circus of a public trial. It's the reality that doesn't get talked about much because it's much less interesting than the straightforward story being fed into the presses. The one about an innocent young boy killed for no reason at all. It's a story about what happens when people are backed into a corner and then told to stay there. It's about a frightened middle class trying to survive. And it's about territory.Settlers make homes. Nomads walk in and out of them. Builders thrive on making things and destroyers on trashing them. Zimmerman picked his side of the coin and Martin picked his.
Daniel Greenfield is a New York City based writer and blogger and a Shillman Journalism Fellow of the David Horowitz Freedom Center.

http://sultanknish.blogspot.ca
Posted by Red Fox at 10:29 AM