This is an article by one of my Icons, Rex Murphy. It is true and precise in that President Obama has lost the sheen of Star Status and is being exposed for what he truly is: An empty suit...

Finally, people are waking up to this Usurper, and like the little boy whose vision was so clear, rightfully claims, "The Emperor Has No Clothes."

When candidate Barack Obama visited Berlin to make a speech some five years ago, half the world was in a Hope and Change swoon. Europe loved the yet-to-be president, and the people of Berlin gave an index of just how much. Could any other contender for president even presume to speak — and expect and get a mass audience! — in a foreign capital? They swarmed to candidate Barack, at least 200,000 strong, drawn by the great force of his charisma and the near tidal draw of his startling and almost instant status as a world celebrity.
The visit to Berlin in 2008 was meant to provoke two comparisons, one with John F. Kennedy who (then) 45 years earlier had shown up in the wall-divided city with his famous “I am a Berliner” declaration, and that perhaps even more famous occasion when President Reagan stood and challenged Mr. Gorbachev to, “Tear down this wall.”
On Mr. Obama’s first visit he was, almost, up to the challenge of bearing a comparison with these illustrious predecessors, both of them in their time genuine charismatic presences. Mr. Kennedy, tragically by virtue of the terrible day in Dallas, is still something of an absolute lodestar as a symbol of youth and idealism. Mr. Reagan’s standing in the memory of many Americans rises with each passing year.
Watching and listening to Obama at the Brandenberg Gate this week, that sad line of Hamlet almost inevitably recurred: “Oh … what a falling off was there…”
Only 6,000 people showed this time, a mere scattering, and these by invitation. The president himself seemed also much diminished. He could not even really bear a comparison with himself the candidate, never mind Reagan and Kennedy. He stumbled in his delivery (the teleprompter and he were not quite in sync for all the speech), wilted in the heat, and looked, this is the key term, so ordinary.
Simply stated, the remarkable charisma of Barack Obama has fled. Fled, mainly because it was in large measure artificial from the beginning, embedded in external circumstances and fuelled in large measure by the media hyperdrive that attended his campaign.
As the first black candidate for  president, he was for very many people symbolic of the great advance beyond race prejudice that has been the hallmark of most Western societies. Thus his world popularity. There was also the natural drama of his great contest with Hillary Clinton. He was a “star” in the greatest real reality show the world knows — the competition for the U.S. presidency.
And finally, the candidacy of Mr. Obama completed a great arc of American history, the drive to exoricse the complicity with slavery that sullied the very foundation of the United States. Significance was written into his campaign. To very many, he was more an emblem than an actual person, with all every person’s faults and limitations.
Looking back it’s obviously easier to see that much of Mr. Obama’s charisma came from without, from these “storylines,” not himself.  He was a vessel, not a generator. He was himself aware of people taking him as a (this is his phrase) “blank slate,” projecting their aspirations and ideals onto him. People really did wish he was a “great man.”
Now five years in office, the inevitable grind of politics has dissipated most of the atmosphere and aura that propelled his rise. Indeed in the week that saw the mediocre and fumbling performance in Berlin, a poll showed for the first time that George W. Bush is more popular than Obama. The sitting president was at 45% and he, whom so many saw as hapless George, at 47%.
We might take from this some caution about the very idea of charisma, and even more so some caution about those who come on the scene in not much more than a vague cloud of appeal, who can draw the crowds and churn even the affections of portions of the normally cynical fourth estate. Unless charisma, as I think it was in the case of Mr. Reagan, or Mrs. Thatcher, or Pope John Paul II, is a function of character, an intrinsic or internal quality of the person, as opposed to a quality of the moment or a press-fevered narrative, it will fade as swiftly and inexplicably as it rises.
Obama’s example, in fact,  might be something of a parable, something close to a caution sign, for candidates and electorates. It will not be as easy now that Hope and Change have lost their lustre, and another charismatic politician has proved to be a disappointment, to ride those airy themes again, or to make celebrity and a kind of charisma-light a real engine for any campaign. 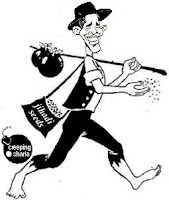