The politicians and social commentators dither as they search for responses to terrorism in Europe this week. It is well known what drives the ideology that leads to terrorist attacks but knowing is one thing, understanding is another. 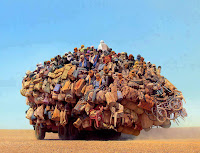 Home-grown radicals are on the rise due in no small part to an incoherent immigration policy that dates back to the nineties and beyond. That can only be arrested now, it cannot be undone. Government policy has to move from containment towards assertive elimination.

Britain’s Muslim population is much more extreme than anyone wants to admit. While a conglomerate of polling would class about 1 in 10 as extreme (over 250,000) almost 40% of British Muslims believe anyone who leaves Islam should be killed, disagree that a Muslim has an obligation to report terrorists to police, and support killing for Islam. 78% support punishing cartoonists who lampoon Muhammad.

The latest government response has been a combination of ‘get tough’ on radical preachers, coupled with more outreach to the Muslim communities that targets young vulnerable believers. Banning certain teachings and organizations though may force them underground which will ultimately make them more dangerous. A ban is only effective if there is enough follow-through for ultimate elimination.

What has to be understood is that it’s not simply a religion that’s being dealt with but a multi-national culture and ideology that is anti-western, anti-Israeli and anti-Christian. It is an ideology that puts Muslim lands ahead of their own. These aspects have to be admitted to and then addressed.
Listen to the rant of one of the London attackers last week. “ I apologize that women had to witness this but in our land women have to see the same”. ‘In our land’ he says, this guy is born and raised in Britain, he speaks with a clear London accent – yet he sees himself not as British, he associates with an ideology of oppressed people.

Maajid Nawaz is a former radical and member of Hizb ut-Tahrir (The Liberation Party) – illegal in Egypt and for which he spent time in prison there. He argues that modern Islamism, which he separates from Islam, is:
Nawaz says …


“It’s individuals or groups of people who cause panic on our streets in London and want to blame foreign policy and quite clearly have an ideological agenda, Nothing we do - whether we change foreign policy or not - will deal with the fact that there are people out there who have this agenda, We need to start addressing this ideology, critiquing it, addressing it, providing counter narratives to this ideology at the grassroots so angry young Muslims no longer subscribe to this ideology - make it as unfashionable as Communism is today.”

He’s got a point but he doesn’t address how easily he was radicalized as a student when he was a teenager. With so many Muslims having so much anger, and a belief that they are Islamic, not British, it is almost impossible to rid them of a concept that they’ve grown up around and of beliefs so common to their community. Indeed given the percentage of British Muslims that believe as they do, Nawaz’s idea of conversion to an Islam at peace with the west is unrealistic, but should be pursued for the limited success it will have.

The current government is nowhere close to being willing to deal with the problems the way they need to be faced. Bound by the constraints of political correctness, tolerance, and some notion of compassionate conservatism there is not a working solution that will satisfy the demands of the limits that have been place.

The Cameron Cabinet, as with their predecessors in the Labour Party, seem all too willing to arrest those who belong to groups with racial tendencies; even to the extent of removing job protections.
They have allowed Christians to be sued for refusing, for example, to rent a hotel room to a homosexual couple. But while British culture is persecuted for being what it is, Islam gets a relative free pass.

It’s time for Britain to get tough! The battle for freedom should not be with free speech but with criminal activity. Islam is an unacceptable ideology for the UK! It has been unwilling to subjugate itself to its host in order to produce a harmonious outcome. It needs to be required to become completely transparent, or face removal – the future of the country depends on it.

David Jennings is an ex-pat Brit. living in California. http://canadafreepress.com/index.php/members/55498/jennings/843