After telling the story of Mohammed’s boast that he would make the mountain come to him, only to be forced to go to it, Francis Bacon observed, “If the mountains will not come to Mohammed, Mohammed will go to the mountain.” 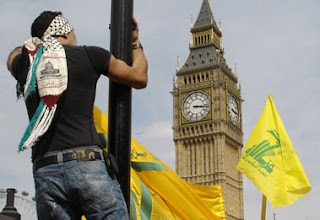 Americans, Englishmen, Frenchmen and countless others went to the Muslim world hoping to turn it into another Boston, another London and another Paris. Instead Boston, London and Paris are turning into another Kabul, another Islamabad and another Mogadishu. Mohammed has come to the mountain.

Five years ago, the sight of Muslim terrorists beheading British soldiers was a horror that could happen in Afghanistan or Iraq. Now it has happened in broad daylight in the capital of the United Kingdom.

In a decade, 600,000 white Londoners have fled the city. Those are the sorts of numbers you would expect from the Syrian civil war. Their place has been taken by the million Muslims occupying the city.

Woolwich Common, adjacent to the area where the attack too place, is described as an “inner-city multicultural neighborhood” which is to say that it is more ethnically diverse than the London average; it has more violent crimes than average and is among the 5% of poorest neighborhoods. Only 58% of its population was born in England and a quarter of its residents immigrated in that same dreadful decade.

Multiculturalism has enriched the area with the Woolwich Manz, a Somali Muslim gang whose antics have led residents to fear walking the streets at night. The Royal Borough of Greenwich’s Social Inclusion and Justice Division informs us that there are thousands of Somalis in the borough, most of whom live in Woolwich Common and Woolwich Riverside.

Gang wars over the lucrative drug business have broken out between the Woolwich Manz and other African gangs. Already in 2007, the London Evening Standardsaid that area residents were describing the Woolwich Common Estate as a “war zone” with stabbings and shootings and a new generation of child soldiers being recruited into the war. It was a little piece of Somalia in the United Kingdom.

The two men who butchered a British soldier are believed to be Somalis. Last year it was reported that dozens of Muslims in the UK were being trained to fight for Al Qaeda in Somalia. There were concerns over what those men would do once they returned to the United Kingdom.

Al-Shabaab, the local Al Qaeda franchise, subsists on tens of thousands of pounds from the hundreds of thousands of Somali settlers living in the United Kingdom. In 2012, Al-Shabaab terrorists had threatened a terrorist attack against the UK, saying, “The nightmare that surreptitiously looms on British shores is bound to eclipse the horrors of 7/7 and 21/7 combined.”

That nightmare still looms. It is the nightmare of the savage wars of the Muslim world being exported to the United Kingdom.

Last year, Shabaaz Hussain was sentenced to five years in jail in Woolwich Crown Court for his fundraising activities on behalf of Al-Shabaab. Five years earlier, Osama bin London and his followers had been sentenced at that same court for the 21/7 plot which attempted to set off bombs in a number of London Underground stations.  The majority of Bin London’s followers were African immigrants.

Ramzi Mohammed, a Somali, turned to face a young mother with a baby in her stroller before trying to detonate his bomb.

Muslim fighters have torn Somalia apart. And importing 200,000 of them into the United Kingdom is beginning to have the same effect. There are an estimated 70,000 Somalis in Greater London. That makes London the 12th largest city in Somalia. Nearly 2 percent of Somalia now lives in the UK.
80 percent of Somalis in the UK live in public housing. They have the lowest employment rate of every immigrant group in the country. And within four years, they had managed to rack up over ten thousand arrests. Every effort to integrate them has failed. Rather than the Somalis becoming British, shards of Britain have become little Mogadishus. 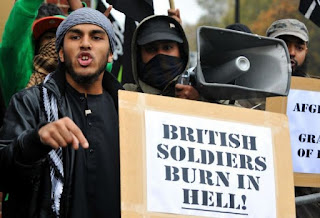 The Somalis are not alone in this regard. Muslim immigration to the UK has brought the norms of Somalia, Afghanistan and Egypt to the streets of London. Individual acts of violence can be overlooked. But there is nothing individual about all these cases. This is a culture of violence.
Islam sanctifies that culture of violence. It takes tribal killings and endows them with the status of a religious duty. Jihad is simply gang warfare, no different than the kind practiced by the Woolwich Manz, given theological meaning. Men have been butchering other men with machetes throughout Africa. But when a Muslim mutilates a British soldier with a machete, then he is engaging in a religious ritual.

This is no clash of civilizations because there is hardly anything resembling civilization on the other side. Islam began with a gang raiding caravans. It now persists in gangs raiding across Africa, the Middle East, Asia and Europe.

The United Kingdom has become a civilized place. Unfortunately its practice of importing savages makes that civilization of climbing roses and social progress unsustainable. If you import millions of people who follow a religion that sanctifies tribal violence, then you must expect tribal violence to tear apart what you have built. And if you do not wish that to happen, then you must close the gates on the barbarians.

There is no need to go fight the Taliban in Afghanistan. Not when they are already living in London in public housing and screeching diatribes about the coming conquest while treating themselves to all the luxuries of the welfare state. And as their numbers grow, ignoring them will become impossible.

The butchers who perpetrated this latest atrocity wanted to be seen. They wanted to break through the media boycott to tell the peoples of the United Kingdom that they were being murdered in the name of Islam. The story is already being met with the usual cognitive dissonance and being swept under the rug, but that just means that the next bunch will try even harder to convey the message that the war is here.

The immediate shift to focus on the backlash that is somehow never nearly as bad as the thing it is lashing back at, the waves of meaningless condemnations from Muslim leaders who say one thing at press conferences and another in their mosques and the deployment of the sickening litany of "tiny minority of extremists" rhetoric are all delaying tactics. But they can only delay for so long. 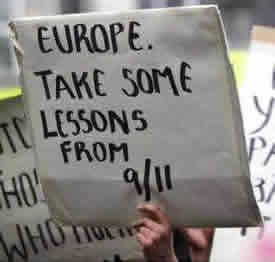 Every Muslim country is either in a state of oppression or a state of war. Does any European country that populates its cities and towns with Muslims really believe that it can escape the inevitable trajectory of this cultural history? The Arab Spring isn't only a lesson in the futility of trying to combine popular elections with human rights in the Middle East. Ir's a lesson in the hopelessness of expecting those same failures to work any better when cultures that choose tyranny over freedom migrate to the United Kingdom or the United States.

The only thing standing between the United Kingdom and Somalia, Pakistan, Syria and a dozen other charming places like these is another two decades of immigration. And long before the irreversible demographic turning point is reached, life in the new Cool Britain will be flavored with regional events like public beheadings, honor killings and religious bombings.

There is no use in proposing that the United Kingdom withdraw from Afghanistan only to come home to another Afghanistan.