BRAMPTON - The Canadian Council of Muslim Women wants Canadians to change the expression “honour killing” to one they think is more appropriate — “femicide” — because they say there is no honour to killing women.
The federal government announced Thursday at the Chris Gibson Recreation Centre that it is giving the outreach group $306,040 in funding for a 24-month national project called Violence Against Women: Health and Justice for Canadian Muslim Women.

“We’re not telling women this is going to make them equal — but we want to give them tools and then the decision is up to you,” CCMW executive director Alia Hogben said. “Young girls don’t know what forced marriage is and how it’s different than arranged marriages.”
Since October, the council has researched four areas of abuse that affects Muslim women — domestic violence in the home, forced marriages, female genital mutilation, and so-called “honour killings” — and published their findings in a book. Their hope is that in the new year, counsellors in different chapters will use the research data to work with communities to raise awareness.
Hogben said they do not keep any statistics specifically on abuse on Muslim women, but they do draw for existing statistics on women abuse — which affects one in seven women. 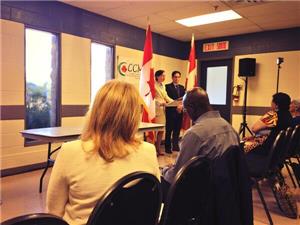 “We get a lot of e-mails from women suffering,” she said. “We’ll hear about women beaten, or wanting to leave, but because they’re new immigrants, they may not have the support they need. A lot of us don’t have family in Canada. People are nervous about going to the police.”
What is unique with this program, Hogben said, is training will be open to certain men, through a vigorous screening process.
“The general trend is we have to empower and work with women,” she said. “If you bring in a man into a group, women shut up. And if he’s the abuser, she’s not going to talk. We’re talking about bringing in men who are in the community, like imams. We’re not threatening men, but we’re saying, ‘You have a responsibility, too.’”
Status of Women Minister Kellie Leitch said eliminating violence against women and girls is a priority for the federal government.
“We recognize Canadians are generous, but this doesn’t extend to harmful cultural practices,” she said at the announcement. “I don’t think any Canadian would tolerate spousal abuse, no Canadian would accept genital mutilation or any of that. We know (the council) is making some concrete outcomes."